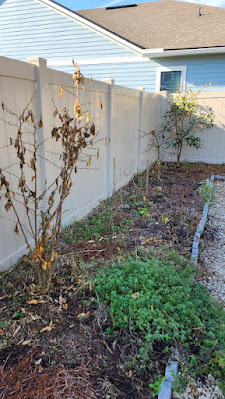 Two years down the road from the last post - yikes! A lot has changed, and a lot has stayed the same. The citrus continues to struggle, despite my best efforts to cover and protect them during several below-freezing nights over the Christmas holiday. Several herbs have run their course and need to be replaced. I'm still fighting nutsedge and other weeds in the beds, but gradually winning...I think.

Pictured at left are the Persian lime, Meyer lemon, Variegated lemon, Ruby Red Grapefruit and Satsuma orange. I know most of these just look like shriveled, brown sticks, but they are all alive, miraculously. The Satsuma (shown at left in the back corner) did especially well and still has many green leaves. That being said, I'm not sure I want to nurse these trees through another year if they're not going to produce any fruit again. I got nothing last year - not even a flower. I will trim them and fertilize in early March and cross my fingers.

Anyway, moving on to the veggies: 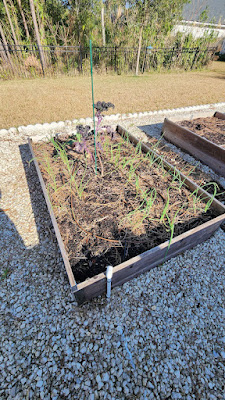 A Day of Progress

It's been a wonderfully exhausting, beautiful day in the garden!

On Saturday, I travelled out to see the good folks at Maggie's Herb Farm and picked out several herbs: borage, lemon thyme, rue, bronze fennel, dill, sage, and parsley. Combined with the lavender, oregano, thyme and chives I already had going in pots, there was a lot of herb planting to be done today.

My decision to plant herbs in front of the citrus trees came about after a little research; herbs attract lacewings, ladybugs, tachnid flies and more good bugs which feast on harmful citrus pests like aphids and caterpillars. It also looks kind of nice to have that second tier of plants in front of the citrus. I'll be mulching the entire bed soon too.

I also planted three types of onions today. These were varieties included in Territorial Seeds' Southern Onion Collection: Red Globe, Texas Early White, Texas Supersweet 1015Y(ellow). These are called "short day" onions and are the only type you're supposed to grow in Florida. This is the first time I've grown bulbing onions from sets, so a little research helped here too.

Not sure what type of onion you should grow? Johnny Seeds has an entire page devoted to Onions and Daylength.

The peas are really getting going and will be slithering up their trellis in no time. I got the Gardener's Supply Expandable Pea Trellis this year for them; this structure comes with a top portion that can be attached to the bottom half when the vines really start to climb. I have not put the top piece on yet, but expect I'll be needing to do so in a couple of weeks.

Lastly, I performed one of my most hated gardening chores: thinning. It is just heart-wrenching for me to clip off a perfectly good sprout to accommodate for adequate plant spacing, but I know it has to be done.

Posted by Tamara at 4:46 PM No comments:

One of my favorite gardening pastimes is definitely seed starting. It's so thrilling to put a little tiny seed in some soil and watch it morph into something completely different. And how amazing is it that you can buy a pack of seeds for a couple of dollars and have it produce huge amounts of valuable, tasty food?

I've bought seeds from a lot of different sources over the years. Many have disappointed me, so this year I stuck with the handful of companies whose seeds have been tried and true in the past, mainly Johnny Seeds and Renee's Garden.

In a couple of instances, I had to buy what I could find where I could find it, because I tend to obsess over certain varieties like a stalker. Case in point: I HAD to have Organic Black Spanish Radish and Purple Sprouting Broccoli seeds and the only place selling them was (ugh) Walmart. When the seeds arrived, I was pleasantly surprised to see they were actually from a company called Sustainable Seeds. We'll see how well they do; so far, seed germination has been excellent for both.

I'm also trying a new grow light this year, as shown in the picture at top. After using standard warm and cool fluorescent shop lights for many years, I've upgraded to the AntLux LED grow light and absolutely love it. It's cool to the touch but really powerful. (I feel compelled to tip my hat to all the pot growers out there who have revolutionized the growing industry with equipment advancements like these.)

For my cool season veggies started in the garage under the grow light, I also tried out another new tool: the Burpee seed starting kit. This tray is a little weird in that it has a mat that wicks water up through the bottom tray and keeps the coir/soil moist in the individual cells in the top tray. It seems to work pretty well, though, if seed germination is any indication; I am at nearly 100%.

Speaking of seeds, here's everything I've planted indoors. These were started around December 19 (yes, I need to keep better records...it's been awhile!)

I hear some of you snickering because I am attempting to grow celery in Florida. According to some here, it is an easy late winter/early spring crop for those of us in the northern half of the state. I'll believe it when I see it. (Let it be known that for 25 years, I heeded warnings in Texas to never even attempt it. Apparently I am getting more adventurous with age.)

Lastly, here are several things I direct-sowed in the garden over the weekend. (The afore-mentioned Black Spanish Radish is already poking through!)

Leafy greens seeds (lettuce, spinach, arugula, etc.) will be scattered over a couple of the beds soon.

Also coming soon: I have the Southern Onion Collection on order from Territorial Seeds and they should actually arrive in a couple of weeks. I think I'll be giving a lot of these to James, as there are way too many in this collection for my somewhat limited space.

I should also be receiving my order of Adirondack Red Potato tubers sometime in March, which is borderline late for taters in North/Central FL, but it is what it is. I am trying these colorful grow bags for those.

Until next time...Happy New Year, and may your seed germination rate be near 100%!

Posted by Tamara at 4:38 PM No comments: